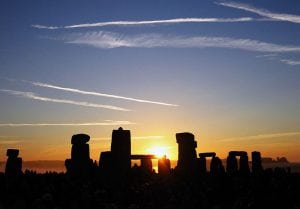 Sunrise over Stonehenge on the summer solstice, 21 June 2005

Stonehenge might be one of the most intriguing things on the planet.  The pre-historic stone formation in England baffles a lot of people and the study of how it got there, how it’s been able stand for so long and why it’s there in the first place is ongoing.  Recently, however the use of our favorite technology revealed some details never before seen.

The first complete 3D laser scan unveiled details invisible to the naked eye, including tool marks, graffiti and damage.  Smithsonian magazine, who wrote about the findings on their site’s blog writes, “tool marks made 4,500 years ago, scores of little axehead graffiti added when the enormous slabs were already 1,000 years old, and damage and graffiti contributed by Georgian and Victorian visitors.”

Details about the alignment also exposed the importance of Stonehenge’s alignment on the winter and summer solstice.  Although the formation is thousands of years old, the creators knew what they were doing. “The largest, most impressive and uniform stones, the digital scan showed, were prominently set where they would be seen first by people approaching the monument from the northeast, which would have lent a particularly spectacular vision in the midwinter sunset. Like modern masons, The Guardian writes, the ancient architects wanted to put their best work where the highest number of viewers would congregate and admire it.”

It’s no surprise to us the power lasers have.  We use them on a daily basis.  For us, it’s always interesting to see how they can be applied to other procedures.  The power of lasers continues to unveil interesting findings in a variety of scientific and mechanical functions.