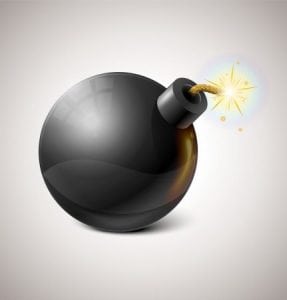 We live in an unpredictable and, at times, unsafe world. Americans, in particular, are desperate to feel safe. That is all we really want for our families and ourselves. With the escalating situation in Syria and the continued threat of terrorism (12 years after September 11th), chemical attacks and bombs are all over the headlines.

So many lives have been lost to bomb-blasts. We are always on edge, questioning the world around us. Airports, for instance, are hotbeds of anxiety. All the security checkpoints! Sometimes it takes forever to get through. While we recognize it is for our protection, it does nothing to alleviate our anxiety. That, however, may soon change due to lasers. Yes, lasers…

Marcos Dantus, a Michigan State University chemistry professor, has (with the help of other scientists, students) created a laser that can detect miniscule traces of explosive chemicals, such as bombs, on luggage, clothes and other items.

In this Scienceworldreport.com article, Dantus says, “Since this method uses a single beam and requires no bulky spectrometers, it is quite practical and could scan many people and their belongings quickly. Not only does it detect the explosive material, but it also provides an image of the chemical’s exact location, even if it’s merely a minute trace on a zipper.”

Inspired by Harvard’s development of a laser that detects cancer, the Michigan scientists set out to create a laser technique that is strong and safe. They did just that. Although the laser works as a single beam, it uses two pulses, one to reverberate with chemical frequencies and the other to act as a guide. Together, the two pulses can effectively locate explosive materials.

While the laser will not fully eliminate the need for anxious security checkpoints, it does make those checkpoints more efficient and ultimately safer, which may lessen the amount of anxiety one experiences. It is amazing to see developments in the extraordinary power of lasers. At Seiffert Industrial, we believe in technological advancements that make the workplace and the world a safer place!