You might not be able to tell by looking up in the sky, but there are more than 1,300 active communications satellites flying miles above our heads every day.

Some of them are owned and operated by national governments, while others belong to private enterprises. From here on Earth’s surface we can’t see them, but we depend on them for everything from the GPS in our phones to the data we keep stored in the cloud.

If all of these satellites were to suddenly stop functioning, we’d be in big trouble. 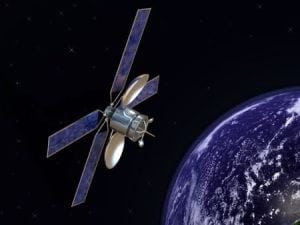 Over the course of the last fifty years, humans have established extensive networks of satellites that work together to monitor our planet and accomplish complex tasks.

The only trouble with these satellite networks is that they still rely almost exclusively on radio transmissions to communicate. Most of these satellites are also in relatively low orbits, so they can only communicate with stations on Earth when they pass over them. This means a satellite might only be able to transmit a limited amount of data back to Earth every 90 minutes or so.

That’s why scientists in Europe have been developing a new satellite-based data network that will use lasers to communicate with earth at speeds nearly 100 times faster than your standard broadband internet connection.

So how does a laser-powered data network work? Let’s take a closer look.

Just a few nights ago, the first component of the European Data Relay System (EDRS) was launched into a geosynchronous orbit from the Baikonur Cosmodrome in Kazakhstan. Equipped with a laser node, the satellite will orbit about 36,000 km above earth – far higher than most current communications satellites. 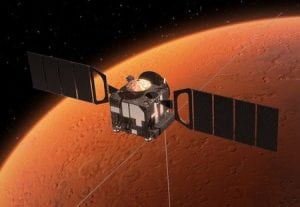 This system requires a great deal of precision to coordinate between low-orbit satellites and relay stations, but it stands to make orbital communications many times faster than they currently are.

Once more of the relay stations are deployed, they will keep satellites in near constant transmission range of ground stations.

There’s no doubt the EDRS is pretty cool, but it could be just the beginning of something much bigger.

There are currently three key issues with using radio transmissions for communication in space.

This means that if we strike out beyond Earth’s orbit toward Mars or even the asteroid belt, radio transmissions won’t be a practical means of transferring data been Earth and its spacecraft.

Lasers, on the other hand, can handle far higher data loads.

This traffic bottleneck is already becoming problematic, and it’s not going to get any better as long as we keep launching more radio-dependent satellites into orbit.

If humanity is going to expand its presence in the solar system, it’s going to need a much faster, more powerful means of communication. Many of the engineers at NASA and the European Space Agency (ESA) think lasers will be the answer to our deep space communications conundrum.

If they’re right, this orbital relay network may well prove to be a testing bed for the communications platforms that will one day keep Earth in contact with colonists on Mars.